For as much as I believe in technology integration, changing with the times, and embracing new ideas, I still love doing things the old-fashioned way. 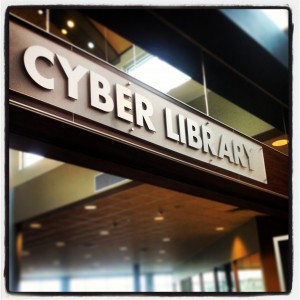 This is the library of a college near my home. I took some students to a workshop there last week and one of the students took us on a tour of the campus. It was a lovely workshop for the most part, and the campus was delightful overall, but walking past a library without a (traditional) book in sight (I’m certain there were e-readers present) stirred a sadness in me.

One of my students even said, “This is a total turnoff. I will not consider this college nor any college that has a library with no books.” Of the students who gave me (unsolicited) feedback, none of them were happy about the bookless  library. Three of them said it made them sad. One seemed more angry than anything … maybe even outraged.

I am guilty of getting overly wrapped up in technology. I have become concerned that I’m more interested in documenting my life and my children’s lives that I’m not living it as fully as I could be if I (more frequently) were to set the iPad down or unplug from my (slow and cumbersome at-home) wifi connection and go outside. It’s not that I never set foot outside or spend time with my children. I just have realized how much of my time is involved in social media, reading the latest articles, networking with peers outside of my school, and … yes … I must admit … dinking a round on games and mindless surfing.  (Do people still “surf the web”? I just realized I haven’t used that phrase for ages. Hmmm.) But there are still things that I like to kick old style. Reading a book is one of them.

Other things I still like to do the old-fashioned way:

It has been assumed by some that because I am a tweetaholic, or because I work in a 1:1 iPad school, or because I sign up for PD at every turn that I’m ONLY into technology, but that’s not true.

I love the simple things in life–a good book, a cup of tea, receiving a letter from an old friend, taking a walk with my daughters and husband, petting my dogs.  However, I also love social media, streaming entire television series on my computer, and iMessage AND what technology has done for the classroom.

I suppose it’s a balance between modern and “old”  that I crave.