The title of this blog post is a bit alarmist, especially since I was specifically speaking from an academic standpoint. Some teachers fear that students who have been assigned to read books that have been made into movies will not read and will just watch the movies instead, presumably working under the assumption that the movie is exactly the same as the book. Alarmist indeed, especially since I don’t think there is any danger in this situation, even academically speaking.

If your student hasn’t read the book, you will know. After all, you can’t flim-flam a flim-flammer … eh? I mean we were high-schoolers once. We went to college! We know all about tomfoolery, malarkey,  funny business, and shenanigans. (I would’ve used another better-known saying at the beginning of this paragraph, but I like to keep this blog family-friendly … ish.) If your student hasn’t read the book, but watched the movie (or for that matter listened attentively during lectures or class discussions), s/he might be able to answer very basic content questions, but it will be nearly impossible for him/her to analyze or evaluate without being vague. This is when you can pull out your questions that pertain to the movie but not the book or vice versa … and BAM! you know you have a flim-flammer on your hands. Proceed according to your classroom policies regarding students who don’t do their work (which hopefully includes trying to get to the bottom of WHY the student is avoiding the work). Will there be the rare exception of the student who is so skilled in the art of bull-skooting that s/he will be able to dazzle her/his way through an assessment over a book s/he has not legitimately read? YES, but you don’t have supernatural powers, so there is nothing you can do about it, so let it go. As long as the student isn’t doing something to hurt her/his classmates, school property or you … for good gravy’s sake, let it go.

CONFESSION: I used to be one of those teachers who lived in fear of students poppycocking their way through a literary unit armed with only their cinematic knowledge of a piece of literature. What if they don’t read? What if they lie to me? What if they trick meeeee? What will my colleagues think of me? What will my principal think of me? Why am I so worried about me? Me? Me? Meeee? Why am I worrying about things that haven’t even happened yet and might not ever happen? Why don’t I trust kids? Why am I such a control freak? The older I get, the more I realize that, except for what I do and feel, I cannot control much else, which allows me to live in fear no more.  A conversation I overheard during a lit circle discussion a day or so ago helped to solidify this and I will tell you about it, but first, a digression:

In my Contemporary Literature class, one of my goals (which is-dare I admit this publicly?–NOT ATTACHED to a state standard—GASPPPPpppp!) is to take each of my students’ stance on reading and move it closer to LOVE.

Allow me to expound visually … 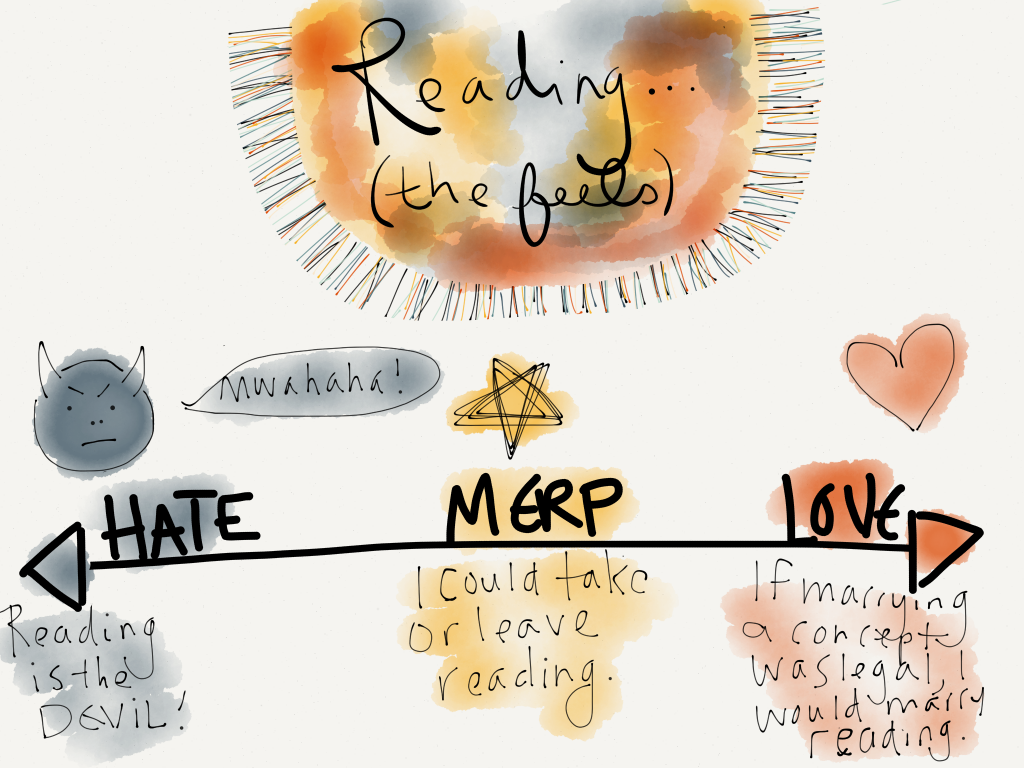 Where do you fall on the Reading (the feels) Spectrum? I’m just west of considering reading as marriage material.

In other words, no matter where the a student is on the Reading (the feels) Spectrum, I want that student to be closer to LOVE when s/he walks out of my class at the end of the semester. Most kids walk into my class with a basic MERPitude toward reading. They don’t outright hate it, but it’s not something they crave. Some kids walk in somewhere between MERP and HATE. Even fewer walk in somewhere between MERP and LOVE. It is a rarity that a student is already in LOVE with reading when they walk in, but it does happen. In fact, every so often I have a student take Contemporary Literature because s/he wants to, even though s/he is already enrolled in another English class and doesn’t need the extra credit to graduate. When that happens it is a true compliment to English Language Arts–probably one of the highest.

In Contemporary Literature, (which originally was created for students who did not plan to attend a four-year college, but now has been overflowing with students of every post-high school intention imaginable … !!!) I use the following things to help move student closer to LOVE:

A. high-interest books: I do not pay attention to reading level or text-complexity. I look for well-written, interesting, books with relatable characters and topics that affect modern students. I don’t give a flying fig if it appears on some elite College Board or ACT list. I don’t care if scholars think it’s trashy, or simple, or cheesy. If it hooks a reluctant reader’s interest, I’ll take it.

B. self and group regulated activities: –like literary circles, for example. Activities like lit circles gives the students choice and independence–something that EVERYONE needs to thrive, whether they are 2 or 100. These are also elements that are too often left out of the classroom, sadly.

C. alternative texts: We dive into graphic novels, science fiction, articles from the web, podcasts, and movies. YES: Movies ARE a -visual- text.

And now back to my original topic … Sometimes books inspire students to watch movies. On the other hand, sometimes movies are the gateway drug to books. Yes indeedy: Movies can lead students to books! Sometimes a kid likes a movie so much that s/he decides to read the book. And, sometimes a kid is assigned a book that has been made into a movie, and even though the movie isn’t exactly like the book, it still helps the kid understand the book–either before the student reads or retroactively. Those are positive things!

Personally, I prefer to read a book THEN watch a movie. However, other people have different preferences. Just because that’s the way I like to do it DOESN’T MEAN EVERYONE HAS TO LIKE IT THAT WAY. (That’s hard for some teachers to grasp, I’ve noticed.) For me, once I’ve seen a movie, it’s hard for me to NOT picture the actor who played each character as I read, and I don’t like that, but not everyone has those issues. They are either able to block the actors’ images from their minds or they enjoy having a visual upon which to rest the mind’s eye. 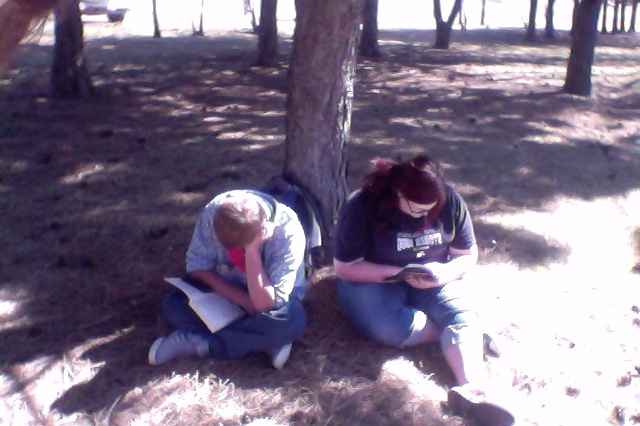 If you choose a book to teach (or allow students to choose a book to read) that has been made into a movie, will you have a percentage of kids who will watch the movie in lieu of reading? ALWAYS. Just like you will always have a percentage of kids who “replace” reading with Wikipedia or Sparknotes or LitCharts or the next newfandangled thang that comes along under the guise of helping people understand literature but which actually serves as a means for kids (and adults) to cheat on content-level tests (and book club meetings). (In fairness to the aforementioned entities, I will say that when used with integrity, they do serve as a resource for helping people understand literature–at a surface level.) That being said, if a kid is able to pass an assessment without reading the book, are you asking the right questions? (That is for another blog post, methinks.)

Now back to that conversation I mentioned earlier in the post. During lit circles the other day, I overheard students discussion the book, The Fault In Our Stars by John Green, which is not only a popular book, but also a popular movie. The group members had all seen the movie. They were comparing the book to the movie and making note of all of the differences. They were also evaluating the movie based on the book–what they liked about the book and what they thought the movie did better. They were also qualifying WHY they felt that way. This was a grown-up conversation, and they were doing this without my guidance and without micro-management of any sort. The lit circle provides a flexible structure for the students. They build outward from that structure. It is always an honor to lead a class in discussion, but it is an even more rewarding to listen to young people do it on their own. And guess what? They held each other accountable for reading. Based on my experience, students are more motivated to be prepared when they know their peers will be upset with them than they are when they just know that the teacher might be upset. And it is one thing to attempt to bamboozle a teacher. It is another thing to attempt to hornswoggle a group of your peers. They will call you out–publicly. And they will determine whether or not you read or just watched the movie and said you read. They will ask the trick questions outright!

The movie version of The Fault in Our Stars served as another point of dialogue for the students. It did not detract from the conversation. It did not demotivate them. They still read the book. They held one another responsible. They got into higher levels of thinking (analysis, evaluation) BECAUSE they watched the movie AND read the book.

Outside of lit circles, there will be kids whose interest is sparked enough by a movie that they will read the books that inspired the movies  … and they might even like reading those books … maybe even a little bit more than they enjoyed their last reading experiences.  As a result, they move a little closer to LOVE!

That is a good thing. That is what teaching is all about.