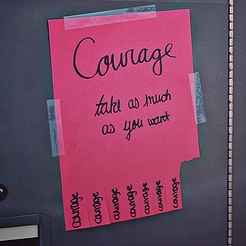 There are different kinds of bravery.

If you say an act takes bravery it does not diminish other acts of bravery. It does not lessen the courage that another act takes. It doesn’t make anyone else less of a hero.

Who owns the word courage? No one. No one person owns any word or color or cause.

For some courage means fighting for other people’s freedom and comfort. For some, it is heroic just to get out of bed. For others, it is admitting publicly who you truly are.

You might not recognize someone’s act as being brave, but that doesn’t mean that it’s not.

Know that one type of bravery does not weaken the others.

My bravery is not better than your bravery; it is just different. It’s still bravery!

Usually once you understand something, it becomes less of a threat. Sometimes it’s a small tweak in perspective that can change the way you see the whole world. Often, once you understand people who are different than you, you can love them. On occasion, it’s seeking understanding that takes bravery.

It was times like these when I thought my father, who hated guns and had never been to any wars, was the bravest man who ever lived.

~ Harper Lee in To Kill A Mockingbird

This is cross-posted here –> I have thoughts sometimes.

Powered by WordPress | Hosted by Edublogs | Protected by CloudFlare