… shall I give my students timely feedback …

… or quality feedback on their writing …

… shall I slip slowly into madness …

~ Jodie Morgenson (that’s me!) on many an anxiety-filled occasion to colleagues, mentors, and anyone else who would listen

A common lament of the English teacher is that she or he is not able to provide her or his students with timely AND quality feedback–that the two ideals are mutually exclusive. It has been on my chief list of complaints since I was a wee newb in the teaching profession. Of course there have been times here and there throughout my career when I attempted the timely AND quality feedback approach by going without sleep or sustenance for 48 hours at a time, but that got old pretty quickly and my loved ones suffered as a result because they had to pick up the slack at home, since I wasn’t around to help, AND when I was around, they had to deal with the mess of a woman who vaguely resembled someone who used to be their wife/mother, but more closely approximated Grendel’s mother in both temperament and appearance (and not the Angelina Jolie version, mind you).

I have favored the oral delivery of feedback in a one-on-one conference setting for the past few years. The face-to-face verbal delivery seemed to be most helpful to students, and it allowed for them to actively question my feedback on-the-spot. The downfall of this method was that I only have my students for 45 minutes per day, 40 if you slice off taking attendance and other daily minutiae. Take away at least another 5 minutes for transitioning between students and other unexpected but inevitable interruptions and we have–at best–35 minutes to conference. I tend to be an intense conferencer–maybe too thorough at times, and therefore inefficient for the group at large–and most last between 10 and 20 minutes … sometimes 25 … and usually towards the long-end of that estimate. Take a class of between 15 and 27 students (This year I have blessedly small classes, but in the years when I’ve had larger classes this gets even trickier.) multiply that times 2 major papers, and I had to find a way to carve out time for between 30 to 54 conferences or 300 to 1350 minutes. This translates into somewhere between 9 to 39 class periods. During a normal week, I see students 5 times, which would mean I need, at minimum, 2 weeks of solid class time to conference with students OR up to a month’s+-worth of conferencing at the high end of that estimate. That’s not realistic, so students would have to make before and after school appointments, give up their study halls or wait until it was almost their deadline before applying any teacher-generated feedback to their final(ish) drafts OR I would have to continually extend the deadline to accommodate those who had to wait on feedback. (I’m not even going to go into what to do with a large group, while conferencing with a single member of the class. That’s another blog entry just begging to be written.)

Usually what ends up happening when a teacher gives feedback on anything substantial, like a literary analysis, for example, she or he has several choices: A. give canned or surface (READ: not helpful) responses and return the feedback quickly B. give in-depth, meaningful feedback a week or more later or C. go stark-raving mad and do both. None of those options sit well with me, so in my eternal quest to become a better teacher AND remain (as) sane (as possible), I turned to my Twitter peops. I stumbled upon a conversation between Jabiz Raisdana (@theintrepidteacher) and Jim Burke (@englishcomp) regarding the frustrations surrounding delivering satisfying feedback to their students. (Jabiz, teaches in Singapore, and is someone I only recently discovered via Twitter, but immediately admired and Jim is an AP English teacher in San Fransciso, CA, and an author whom I’ve admired for quite some time, mainly because I have read and/or own and appreciate so many of the books he’s written.) It came up that Jim was working on a new idea for delivering timely and quality feedback to each of his students (and it sounds like he sees WAYYYYYY more students than I do in a given day) so my digital ears, naturally perked up. Eventually Jim posted this:

I saw this as my AP students were in the early stages of writing first semester’s first major formal writing assignments–a literary analysis and mimesis–both of which would require some hefty feedback, and because it was nearing the end of the semester, that feedback needed to be timely. Doling out feedback via conferencing two or at best three per class period, would not cut it.

Jim’s proposed method works as follows: 1. reading student writing, 2. recording verbal comments with the standard voice memo app on his iPhone, 3. emailing the recording to students. In case you didn’t get to see the afore-linked video, in it, Jim demonstrated his process by recording himself doing it!

1. I use an app on my iPad called Highlight. The reason I like this app is because you can mark important points in your recording, if you so desire. It also give you the option of sharing your files via Dropbox or email. However, you can use any audio (or video) recording app on your iPad, phone, or computer, so long as you have a means of sharing the audio files with your students.

2. Highlight gives me the option to title the audio file, so I use the student’s first initial, last name, and an abbreviation representing the type of writing I’m assessing. (For example, if I was creating an audio feedback file for Mergatroid McFancyPants’s literary analysis, I would entitle the file MMcFancypantsMIM.)

3. With the student’s paper in front of me, I begin the recording, and read the paper entirely aloud*, adding constructive criticism as I go. My recordings lasted anywhere from 10 to 16 minutes, and I believe (okay I’m really really really really really really hoping) that I can streamline this process and get better at being more efficient with how long it takes to deliver information. Methinks I have a tendency to give too much information. Anyone who is still reading this blog post knows that … *rim shot*

4.  While I’m reading and delivering commentary, I mark the paper to indicate what I’m talking about during my commentary.

5.  I send the audio file to the student via email (but I could just as easily establish a shared Dropbox folder with my students and do it this way and I may do so in the future).

6. Next time I see the student, I hand her or him the annotated copy of her or his writing and encourage her or him to listen to the audio with the written version in front of her or him, and to ask me, email me, or tweet me with any questions.

*One reason I read the entire paper aloud is because I learn by doing and by reading with my eyeballs and hearing with my earholes, I am not only seeing what is good and what needs work, I’m hearing it as well, so I feel I am better able to give higher quality feedback. Another reason I do this is because I have found value in allowing a student to hear her or his work read out loud as well because ofttimes students’ ears catch what their eyes miss, AND, as a writer, I know that it is rawwwwther delightful to hear someone else read one’s work aloud, even if it is a little rough around the edges.

What follows is a sample excerpt of some audio and written feedback I provided to a student regarding a mimesis, which emulated the work of Flannery O’Connor. Note that I have cut out any references to the student’s name AND that this was the first time I’d ever provided audio feedback to this student, so there’s explanation at the beginning that will be unnecessary in subsequent audio feedback. 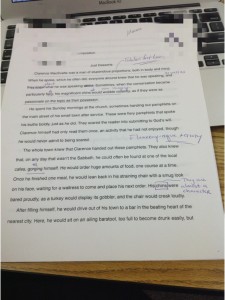 As you could probably observe by listening to the audio file, since I am still feeling out this technique, *I* am a little rough around the edges. When I listened to some of them, I couldn’t help but assess my own verbal fluency. Always learning, am I.

The lit analyses’ and mimeses’ deadlines were staggered, so that they would be delivered unto me at different times. The lit analyses came in first. I experimented with the process by meeting face-to-face with some of the students and providing recorded audio feedback to the others. This year I have the luxury of teaching a small single-gender AP English Lit and Comp class, so this worked well. I informally polled the students who received audio feedback and heard things such as this:

The mimeses’ drafts were due after the lit analyses, so for that assignment, I decided to try exclusively audio feedback. Afterward, I polled the students via Twitter and received similar feedback to that listed above. It was encouraging to talk to them about it in class too. It was heartening to hear a student say, “I think you should do that every time,” and have the majority of the class agree. Even those who prefer the face-to-face conference still found value in the recorded audio feedback and understood (as mature seniors in high school do) the value in receiving feedback in a timely manner, even if it is not delivered in-person.

Despite the fact that I’m still spending 10-16 minutes (more really if you figure in set-up, sending emails, and imminent screw-ups on the part of yours truly) I can do it whenever I have time. It doesn’t cut into instruction time and, as a proud insomniac, this can include middle-of-the-night feedback sessions, which, for me, are the most productive ones. (Student marvel at why they receive emails from me at odd hours.) As I stated previously, I believe that I will become more efficient with my feedback as I get better at it and hope to cut down my time commitment to this arduous task.

Thrilled is a good way to describe how I feel when I discover something that is beneficial to both teachers AND most importantly students, so thrilled I most certainly am right now. This technique is my greatest discovery in my quest to better serve students as of late. HUZZAHHHHH!

8 thoughts on “A Possible Solution for the Angst-Ridden English Teacher, Struggling to Provide High Quality, Timely Feedback to Young Writers”